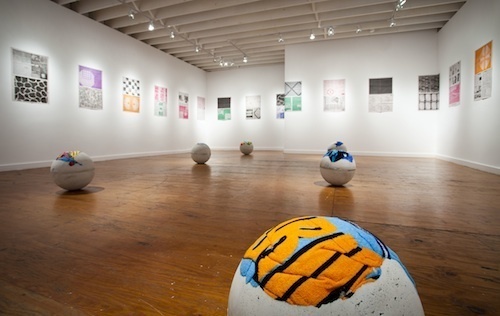 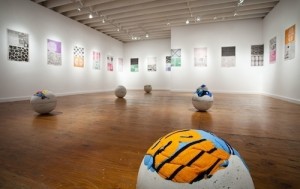 View of “Drywood,” 2013.
“Drywood,” the title of this exhibition, refers to Cryptotermes brevis, a termite that can survive with barely any water, relying on six rectal glands to retain all moisture from digested matter. Endemic in Florida, it is an apt symbol in the hands of Gean Moreno and Ernesto Oroza, who here use the insect to signify another tropical infestation—the tourist souvenir. Just like a termite gnaws through walls, a souvenir eliminates the distance between cities and undermines their autonomous identity by propagating a simplistic, generic reading of a place. For their first exhibition at this gallery, Moreno and Oroza have placed twelve cement balls—each fifteen inches in diameter—in two neat rows across the front space. Before the concrete was poured, the artists stuffed the molds for the balls with Florida-branded beach towels featuring dolphins and sunsets, and now the spheres hemorrhage patches of brightly colored terrycloth. In its raw materiality and its role as a protective shell, the concrete hints at both the manufacture and the transportation of these souvenir items. Moreover, the anonymous surfaces, crisp and unadorned save for the prints of sea turtles peeking through, underscore the inherent sameness of all tourist items—the tchotchke Platonic ideal.

But the cracking face of the spheres realizes a breakdown of the logical dissemination of the souvenir and similar consumer items, a crisis that is examined in the rest of the show. Stapled to the walls in ordered repetition are twenty-four issues of Tabloid, Moreno and Oroza’s single-page newsprint journal, at once a record of their practice and an ongoing critique of mass production. A bootleg copy of Glauber Rocha’s 1972 Brazilian film Cancer plays in the back room. The visceral memory of the Brazilian avant-garde is evoked by Rocha’s self-proclaimed experiment in minimal editing, and within this streamlined world of the spheres and the newspapers, it is a rambling, amorphous intrusion. Like the termite, the film burrows through the traditional borders of shot and scene by actively ignoring editing. Here is the crux of Moreno and Orozas’s argument—an attempt to unite the production and distribution of souvenirs through the strange biology of termites. Throughout the show, the uneasy placement of the objects foreshadows future rupture. The artists have set the spheres on the cracks between the floorboards and one, set off by the crack, seems to be threatening to tunnel—not unlike Cryptotermes brevis—right through the drywall.